This document discusses the economic aspects of a future final status agreement between Israel and Palestine on the issue of Jerusalem. Its main goal is to offer ideas for the economic agreements and arrangements that should accompany such an agreement.  It also studies how economic considerations might affect reaching and sustaining a political agreement on Jerusalem.

We bear in mind that an economic agreement will be part of a broader Israeli-Palestinian final status agreement, which will be very difficult to reach. Since we are so far away from an agreement, it is hard to imagine how it will look. The difficulties in forecasting an agreement are even greater in Jerusalem, where the current positions of the two sides are much farther apart than on most other issues of the conflict, and so the shape of a future agreement is even more uncertain. Thus, in some cases our recommendations for economic arrangements do not address a single solution, but rather a range of possible solutions.

Jerusalem has national-historical significance to both Israelis and Palestinians. It was the capital of the country in most historical periods. After the British Mandate, in the years 1948 – 1967, the city was divided between West Jerusalem in Israel and East Jerusalem, controlled by the kingdom of Jordan. The dividing line was called the “Green Line.” Immediately after the 1967 War the Israeli government decided to annex East Jerusalem. This annexation added East Jerusalem, an area of 6.5 sq. km, and a larger area of 70 sq. km, which included 28 villages close to the city.  The annexed territory became part of the greater municipal Jerusalem. The Palestinians in the annexed areas became residents of Israel, but not citizens. 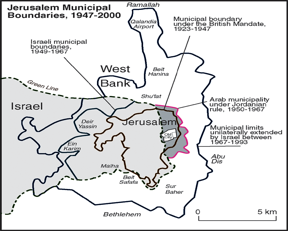 After the annexation in 1967, Israel began massive construction in the annexed area of both neighborhoods for Israelis and of infrastructure. In 1982, the Israeli Knesset passed special legislation that further formalized the annexation of East Jerusalem by defining Jerusalem as a unified city within the Israeli municipal borders. These borders created a line between East Jerusalem and the West Bank and thus began to separate the Palestinians in the two areas. Palestinian residents of East Jerusalem differed from residents of the West Bank by identification, by participation in Social Security programs, and by ability to enter Israel and work. The separation increased over time. Access restrictions on entry of West Bankers to Jerusalem intensified during and following the Second Intifada (2000-2005). The separation became almost hermetic with the building of the wall which separates East Jerusalem from the West Bank, and served to reduce mobility between the north and south of the West Bank as well. Further intensifying the separation of East Jerusalem from the West Bank is the on-going expansion of Ma‘aleh Adumim, a settlement east of Jerusalem founded in 1975, and its many satellite settlements. This expansion threatens to effectively close the eastern gate of Jerusalem, and sever the West Bank in two.

We next classify the many possible regimes in Jerusalem into three main types:

In this case, there is free movement of people and goods between the two cities, but then Jerusalem must be separated physically both from the rest of Israel and from the rest of Palestine, to avoid smuggling and trade violations through the city.

The third case is a combination of the two above cases. A smaller area in the city is open, for example the Old City, while the rest of the two cities are divided physically.

In order to analyze the different regimes, we need to consider the possibilities with respect to the location of the political border since the two are strongly related. There are three main possible locations of the border:

From this discussion we reach the following conclusion: The future decision on the regime in Jerusalem will be significantly affected by the location of the future political border in Jerusalem. The closer the border is to the 1967 line, the stronger the “physically divided city” option becomes. If, however, the border is close to the current divide between Jews and Arabs, then the option of an “open city” rises. It is also important to note that there are some economic considerations with respect to the choice of regime in Jerusalem. One consideration is the current income gap between the two parts of the city. An “open city” regime might continue the specialization in low-skill services in East Jerusalem and it might also hamper economic development.

The general regime of international trade recommended by the Aix Group for Israel and Palestine is a Free Trade Area. This means bilateral free trade between Israel and Palestine, while each country sets its own independent trade policies with third countries.

We next examine whether Jerusalem should have the same trade regime. We begin with the following immediate conclusions:

These conclusions help us to analyze the interaction between the city regime and the trade regime. Once independent, Palestine might decide to impose higher tariffs and taxes on various goods, reflecting both the need to finance its expenses and the protection of local infant industries. Israel, however, has relatively low tariffs and purchase taxes. Such discrepancies in tariffs and taxes between Israel and Palestine might lead to massive smuggling through Jerusalem, which could be quite costly for both sides. We estimate that the costs of smuggling to Israeli public finance will not exceed 1 percent of GDP. While this figure is not very high, it is not negligible and is around 3 percent from the total tax revenues. It is hard to draw conclusions to losses of income to the Palestinian government, but we can say that these losses could be much higher, since income from purchase tax and tariffs will be larger relative to income in Palestine. There would be additional non-pecuniary costs, both social and moral, to making Jerusalem a main channel for smuggling between the two states. These potential costs of the trade arrangements in Jerusalem, imposed by the “open city” regime, should be taken into consideration when the future regime of the city is discussed in the political negotiations as they make the “open city” option less attractive.

Generally, the Aix Group recommends that labor flows between Palestine and Israel will be free, subject to regulation through taxes and/or permits. We adopt this idea for Jerusalem as well, with one addition. First, unlike trade in goods, labor arrangements do not depend much on the possible regime in the city. The main reason is that while trade in goods is anonymous, labor contracts hold for well-known parties. Hence, it is possible to allow labor flows across a physical border, and it is possible to regulate labor flows even if the city is open. Hence, labor arrangements in Jerusalem can be similar to the general labor arrangements between the two states. One difference arises from the fact that Palestinians from East Jerusalem have been working for Israeli employers for many years. We therefore suggest that there should be an additional provision for Jerusalem, that Palestinians from East Jerusalem who have been working in Israel prior to the agreement will be able to keep their jobs until retirement, or at least for ten more years.

Our recommendations on dividing the infrastructure between the two cities are:

Since 1967 Israel has built 12 settlements/neighborhoods in East Jerusalem. Around 200,000 Israelis live in East Talpiot, Gilo, Givah Tsarfatit (French Hill), Giv’at Ha-Matos, Har Homa, the Jewish Quarter of the Old City, Ma’alot Dafna (East), Neve Ya’acov, Pisgat Ze’ev, Ramot Allon, Ramat Shlomo and Ramat Eshkol. To this we should add Atarot, which is mainly an industrial and commercial center. While Israel views them as legitimate neighborhoods that should remain in Israel, the Palestinians view them as illegal settlements that should be evacuated. Still, it seems that any future agreement on Jerusalem might leave some settlements/neighborhoods under Israel’s sovereignty, within the framework of a land swap, but might also include the evacuation of some to enable more contiguity and future development space for East Jerusalem.

Hence, our working assumption is that a future agreement on Jerusalem will determine which settlements/neighborhoods will become part of Israel and which will be evacuated. Here we deal only with the economics of such an agreement. While we cannot foresee the exact location of the future border, we can foresee two types of economic-geographical issues that such a border will create. One is how to conduct an evacuation of a settlement/neighborhood, if it remains in Palestinian territory. The second is how to build and finance infrastructure adjustment for contiguity, like tunnels, bridges, or circumventing roads. Even if the source of many finances will be the international community or donor countries, we discuss the payments as bilateral, to clarify responsibilities and mechanisms.

We first describe how to transfer settlements/neighborhoods to the jurisdiction of Palestine. The JENT will negotiate and reach a specific economic agreement over each such settlement/neighborhood, which will follow these guidelines:

Dividing the city also requires building infrastructure to enable mobility between Jerusalem neighborhoods, above, below, or around neighborhoods of the other city. We divide the issue into two, construction and finance:

All Palestinians who currently have Israeli residency status are compulsorily insured by the National Insurance Institute (NII). According to the 1999 income surveys of the Inter-Commercial Business System (ICBS), East Jerusalem Palestinians received substantial amounts of their net income from the NII, 19 percent of their net income, compared with only 9 percent for residents of West Jerusalem. The Palestinians in East Jerusalem also participate in the Israeli Public Health system by paying the health tax to the NII, which entitles them to receive health services from the Israeli HMOs and hospitals.

We have four basic recommendations in this area:

Finally, we would like to highlight an economic reason why settlement building and other “facts on the ground” make it harder to reach an Israeli-Palestinian agreement, because such activity has an adverse effect on economic development. We strongly believe that economic development in Palestine is crucial to reaching an agreement and sustaining it. People who live in a developing economy and who work hard on improving their standards of living are less willing to indulge in fighting, hatred and hostility. The main barriers to economic development in the Jerusalem region are the separation wall, the expansion of settlements and the light rail. The separation wall closes East Jerusalem from the large Palestinian area and puts obstacles between the north and south parts of the West Bank. The expansion of the settlements east of Jerusalem, especially between Jerusalem and Maale Adumim, further blocks passage between the two parts of the West Bank. This hurts not only the current economic status of Palestinians, but it also reduces their ability to begin large-scale development projects for the future. The light rail also contributes to the expansion of settlements east of Jerusalem by better connecting them to the center of the city. This significantly supports the expansion of these settlements.

The agreement is feasible, but costly, mainly due to the costs of setting the border, evacuating neighborhoods/settlements and building infrastructure. This is a result of the vast Israeli settlement activity in East Jerusalem and around it. These costs are increasing over time as a result of ongoing settlement activity. One conclusion of this analysis is that imposing a settlement freeze in the West Bank in general and in East Jerusalem  specifically is required both politically and economically.

This report ends with a mixed message. Peace in Jerusalem is possible, but time is running out. There is a need to begin negotiations soon, but more  importantly there is a need to stop the building of settlements immediately, as it derails Palestinian economic development, hurts trust between the two sides, and sends a negative signal on the willingness to reach a lasting agreement.